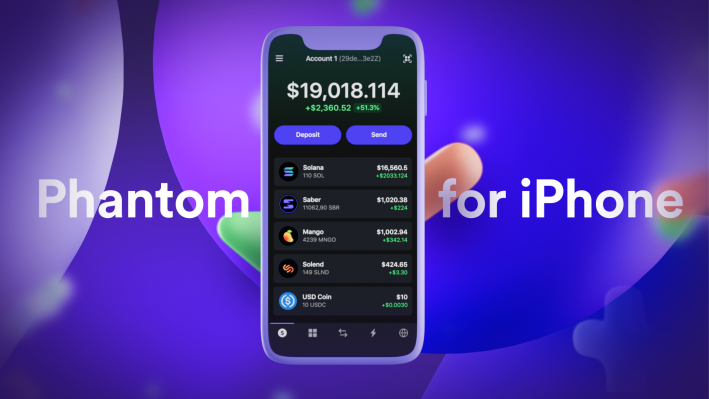 Phantom, one of the leading wallets to interact with the Solana (SOL) blockchain, saw its valuation reach $1.2 billion after closing a fundraising round of $109 million. At the same time, the Phantom Wallet is now available as a mobile version on iOS.

Phantom , one of the most popular wallets to interact with the Solana (SOL) blockchain , announced at the same time that it has closed its Series B funding round as well as the release of its mobile application on iOS.

“The Phantom team is honored to work with these incredible partners and to have their confidence in our journey to bringing Web 3.0 to the world. It is evident that the adoption of non-fungible tokens (NFTs) and decentralized finance (DeFi) has highlighted the crucial role of cryptocurrency wallets in providing a user experience that is safe, fun and easy to use. . »

The funds raised will be used to provide more tools to improve the developer experience and facilitate the transition to Web 3.0 , but also to develop the cross-chain function of the wallet and recruit new people to the team. of project development.

The release of an application on iOS

Phantom also announced the release of its own application on the App Store , the latter being already available for download in French.

The interface is exactly the same as on the web extension, rather uncluttered with most of the options available in the bottom bar.

The wallet allows to deposit, send tokens and swap them, but also to view its collection of NFTs and browse websites allowing association with Phantom.

Without specifying a date, Phantom also announced that the release of its mobile application for Android would happen in the near future .

“These additional platforms will provide both promising avenues for user growth and opportunities for safety and security innovation. »

Phantom could establish itself as a reference

First launched in beta form in March 2021, then launched in its official version in July of the same year, the Phantom wallet has seen its number of users grow  exponentially  :

With all this data and the desire for Phantom to implement on the Ethereum blockchain by the end of the year , it seems well on its way to making a name for itself in the world of digital wallets.

Polkadot (DOT): Two projects guarantee the survival of the network